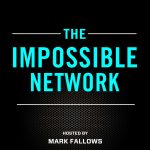 The Impossible Network
147: Carmen D'Alessio on Studio 54 - Our 2019 Interview Revisited

Due to a guest rescheduling, this week we are republishing part two of last year’s interview with New York nightlife legend Carmen D’Alessio.

We loved this show not just for the incredible stories she tells, but for what she represents. Carmen is living proof that that reinvention is ageless, energy is infectious, and a reminder of the power of a large network.

If you’ve not heard Carmen, buckle up, if you have I am it’s worth a second listen.

Now over to Carmen

Born to a Peruvian father, and a Chilean mother, but grew up to become a legend of New York nightlife, impresario co-founder of Studio 54, and to this day not only continues to reinvent herself but also entertainment experiences, is this week’s guest Carmen D’Alessio.

In Part two of this interview with Carmen D’Alessio, the New York nightlife legend, impresario, and co-founder of what is often referred to as the greatest club of all time; Studio 54, we explore the untold story of the nightclub’s formation.

We start the interview with Carmen recounting her second marriage and leaving Italy and working for Valentino in Rome to return to NYC to build her ‘Queen of the Night’ reputation.

If you’ve seen the 2018 Netflix documentary on the infamous nightclub you’ll hear the other side of the founder’s story on how the sensational nightclub came into existence.

Carmen also recounts her memories of those unparalleled 33 months of hedonism, having her mother around her, and how the era ended and the world changed

Finally, we cover her quick-fire questions and answers

I hope you enjoy the wit, wisdom, and wonder of Carmen D’Alessio.

How she moved into fashion

Beginning her career as a nightlife promoter

How the day to day operation worked

Her superpower of connecting people

Spontaneity and living without consequences

How Aids changed everything

How nightlife has evolved as she has aged

Staying young, her sense of adventure and freedom

Her mother’s lust for life

The Gospel according to carmen

Her feeling of youthfulness

Her patience and faith

Links in the Show